Piano rotating inside The Blue Cabin
In 2015 Al Neil’s Farrand upright piano moved out of the Blue Cabin on the shore of Burrard Inlet. It was lifted over the cabin’s roof with an excavator and transported by artist Luke Blackstone to his studio. Since the time of that transition, I constructed a kinetic sculpture to rotate the piano, mounted on a steel frame, and programmed to follow historic tide data from the cabin’s location by the water.

I was in residence in The Blue Cabin Floating Artist Residency, moored in False Creek, from January 22 – March 6, 2021. Inside the cabin once again, the piano rotated with local data collected from False Creek. Its sounds reverberated the interior of the cabin, tracing its history across the waves of time and water.

During the residency, Thomas Evdokimoff operated a live open mic from the Blue Cabin, streamed to the world-wide soundmap at Locusonus.org. He also recorded source material for sound pieces that incorporate the piano, cabin, and surrounding areas. 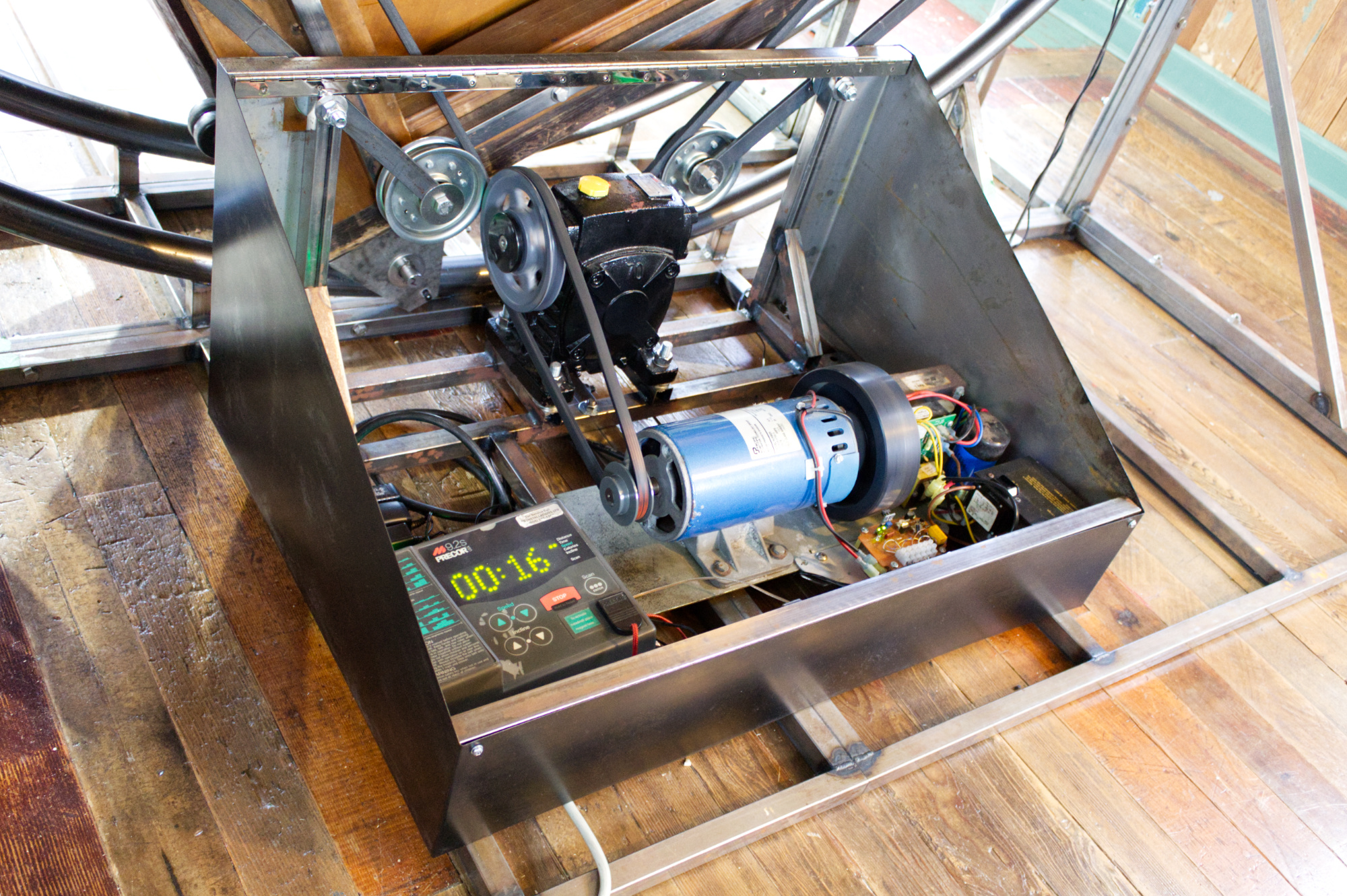 The piano is rotated by a repurposed treadmill motor. Show here are the guts of the treadmill, as well as some extra gears, belts and pulleys leading up to the back of the piano. 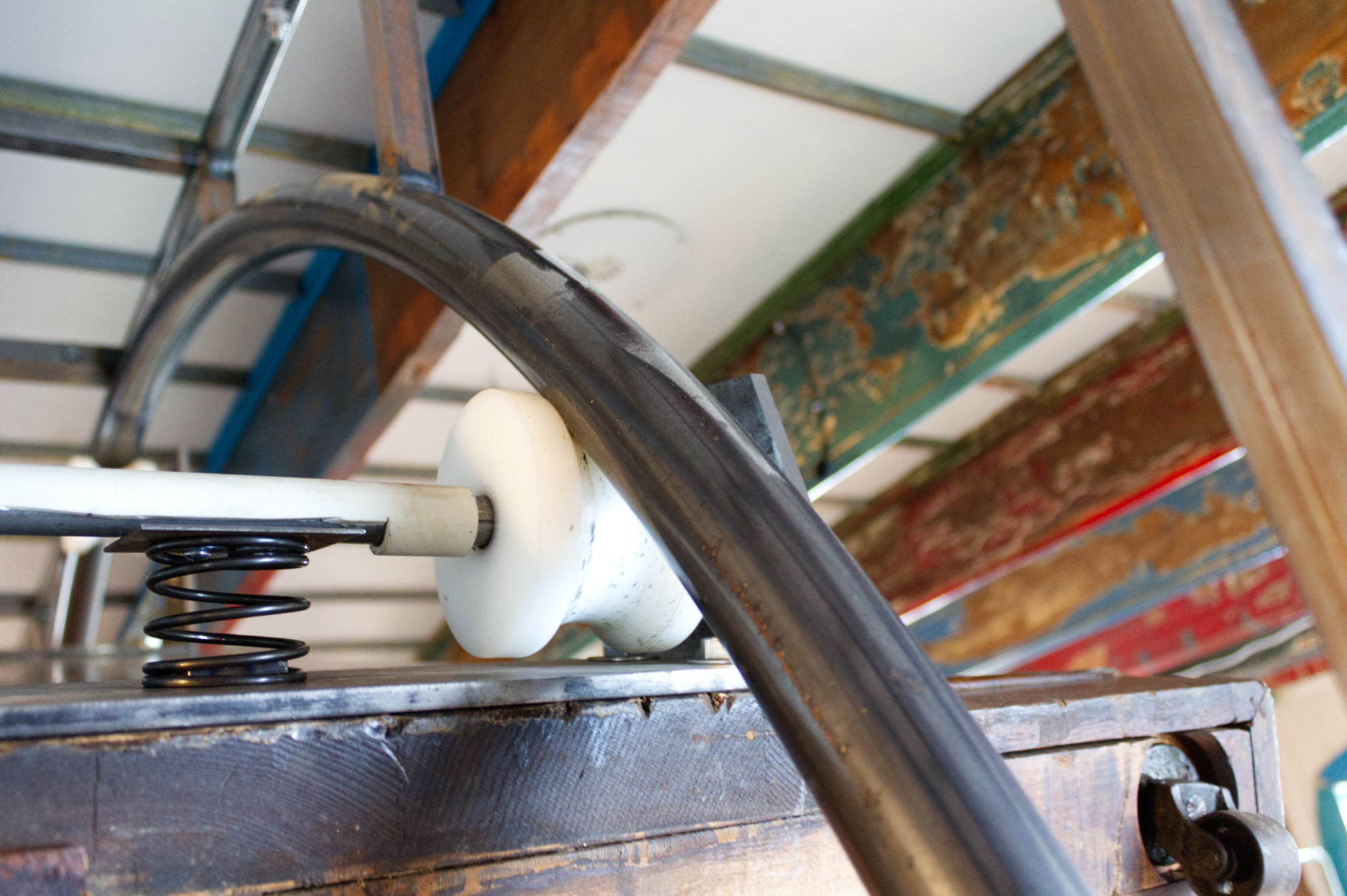 Detail of axle with handmade wheel and spring assembly, against the colourful ceiling of The Blue Cabin.

View of the back, inside The Blue Cabin 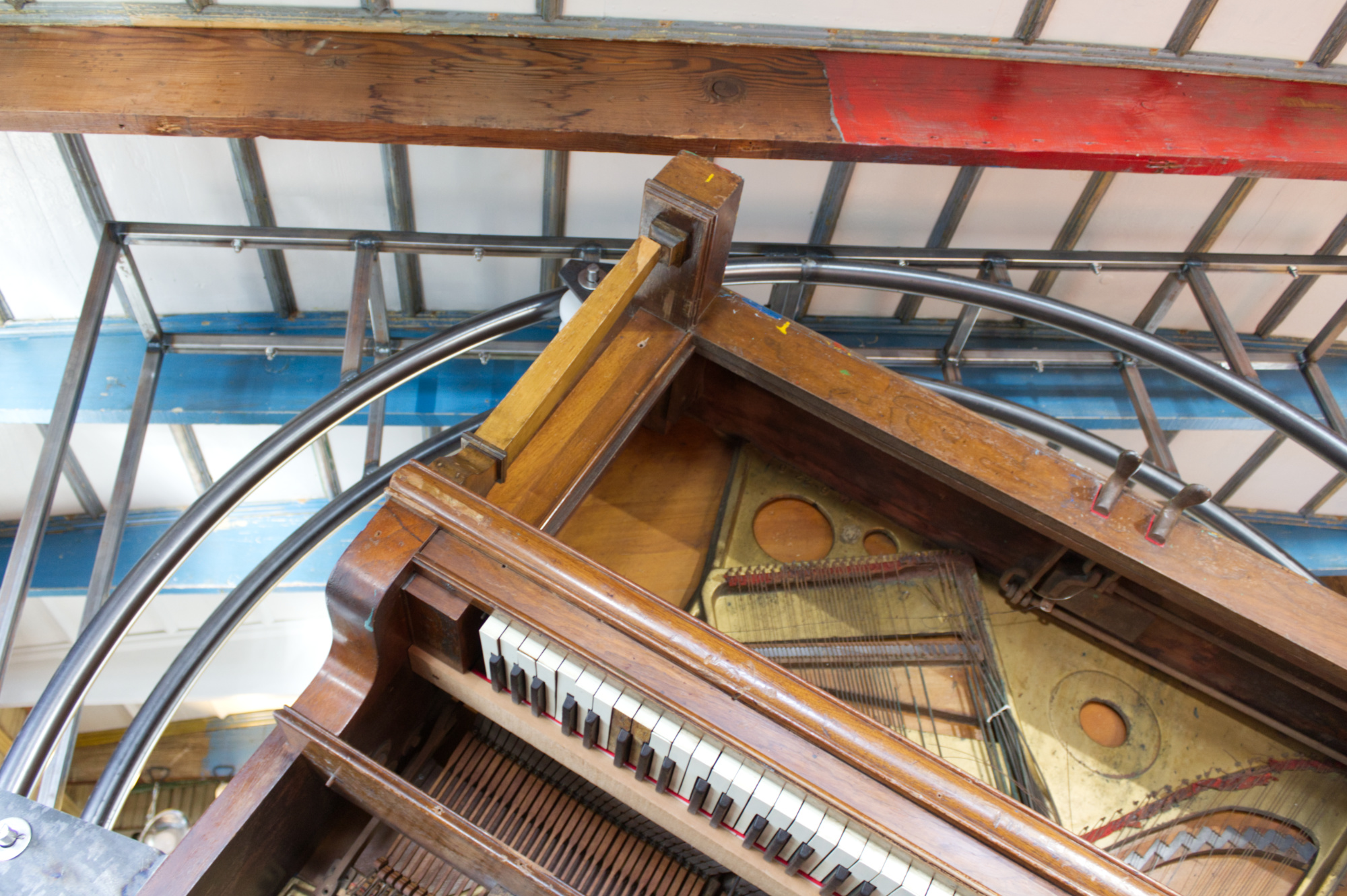 Detail of piano upside down inside its framework, against the ceiling of The Blue Cabin 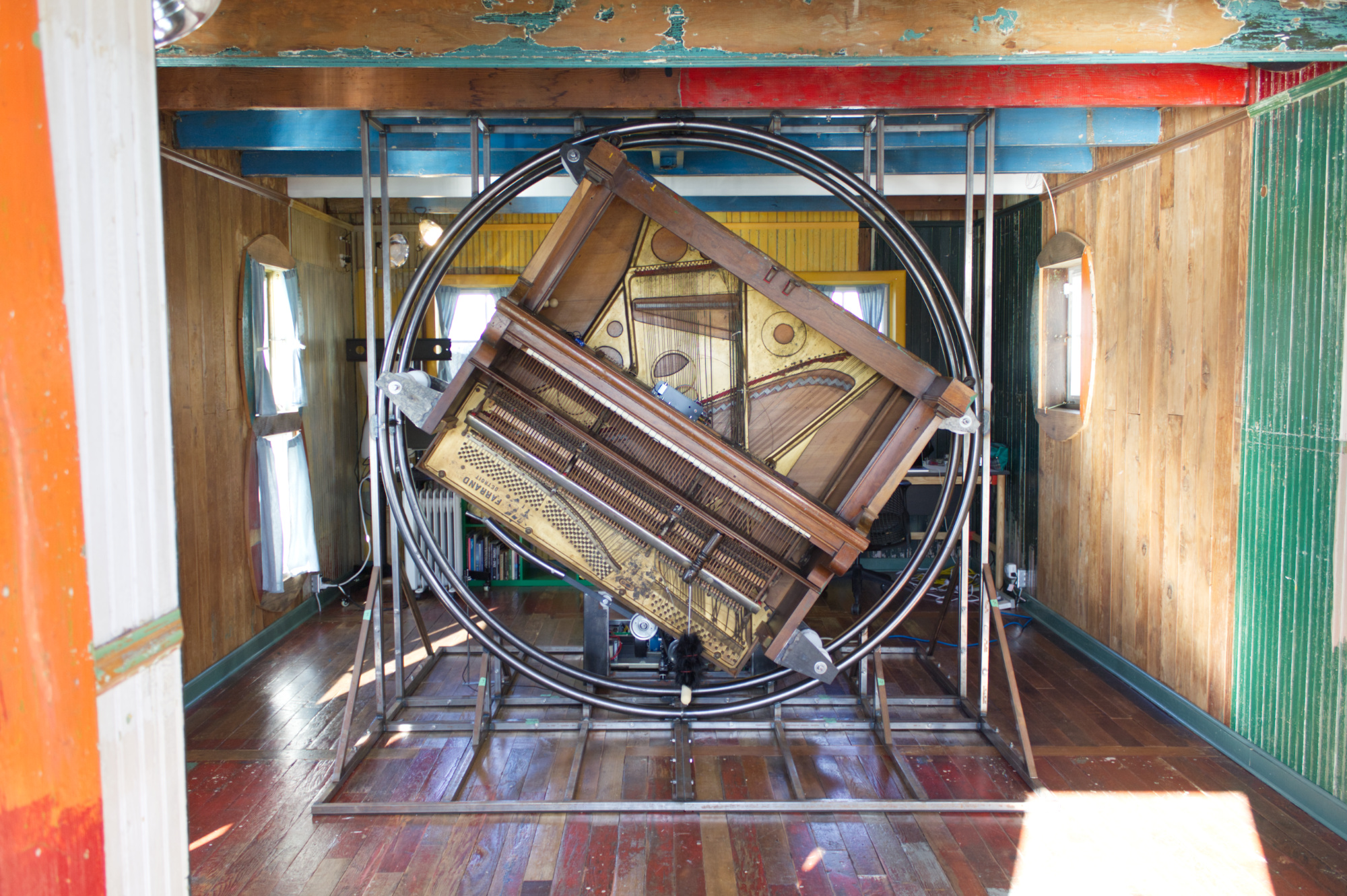 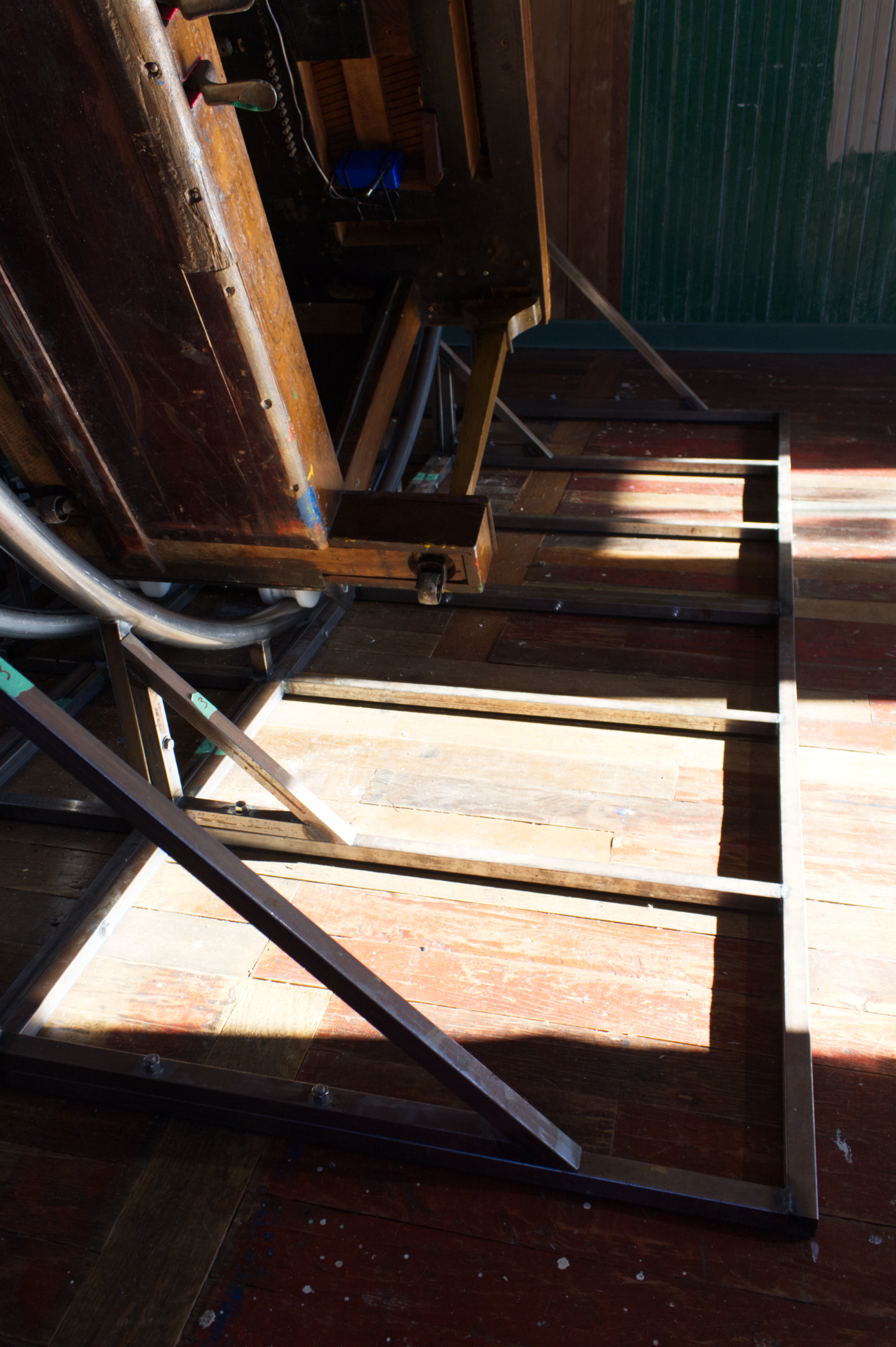 A view of the underside of the piano, with sunlight streaming in the windows, across the floor of The Blue Cabin

Al Neil (1924-2017) was a celebrated Vancouver musician, writer, and visual artist. From 1969 until 2015 this piano was a fixture in the Blue Cabin, Neil’s home with his partner, artist and collaborator Carole Itter.

Starting in 2017, I used the piano for an exploratory learning project, as part of a year-long mentorship project with Luke Blackstone, supported by the BC Arts Council. This project grew out of the research and work I completed with Luke during that time. I am grateful for the support of the Canada Council of the Arts and the Blue Cabin Floating Artist Residency to complete this project. 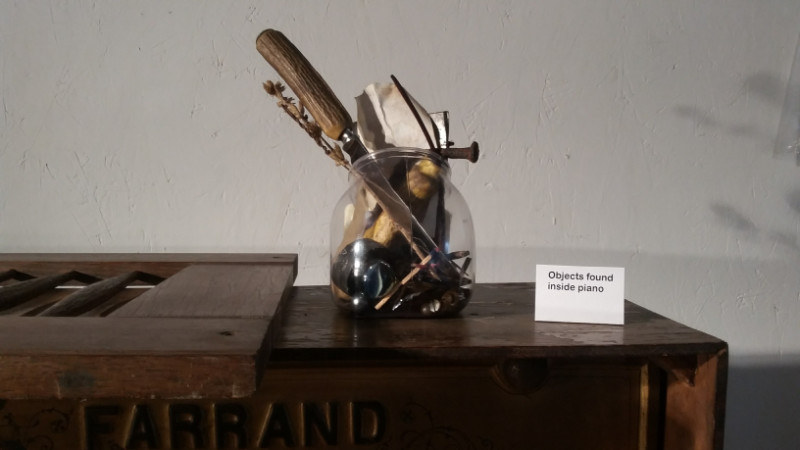 Some objects found when cleaning out the piano in the studio

Detail from the back of the piano

The Blue Cabin Floating Artist Residency Project – Find out where the Blue Cabin is now, upcoming residencies and programming

Vancouver Art in the Sixties archive – more about Al Neil

Currents and Waves radio features programming dedicated to The Blue Cabin every Thursday.